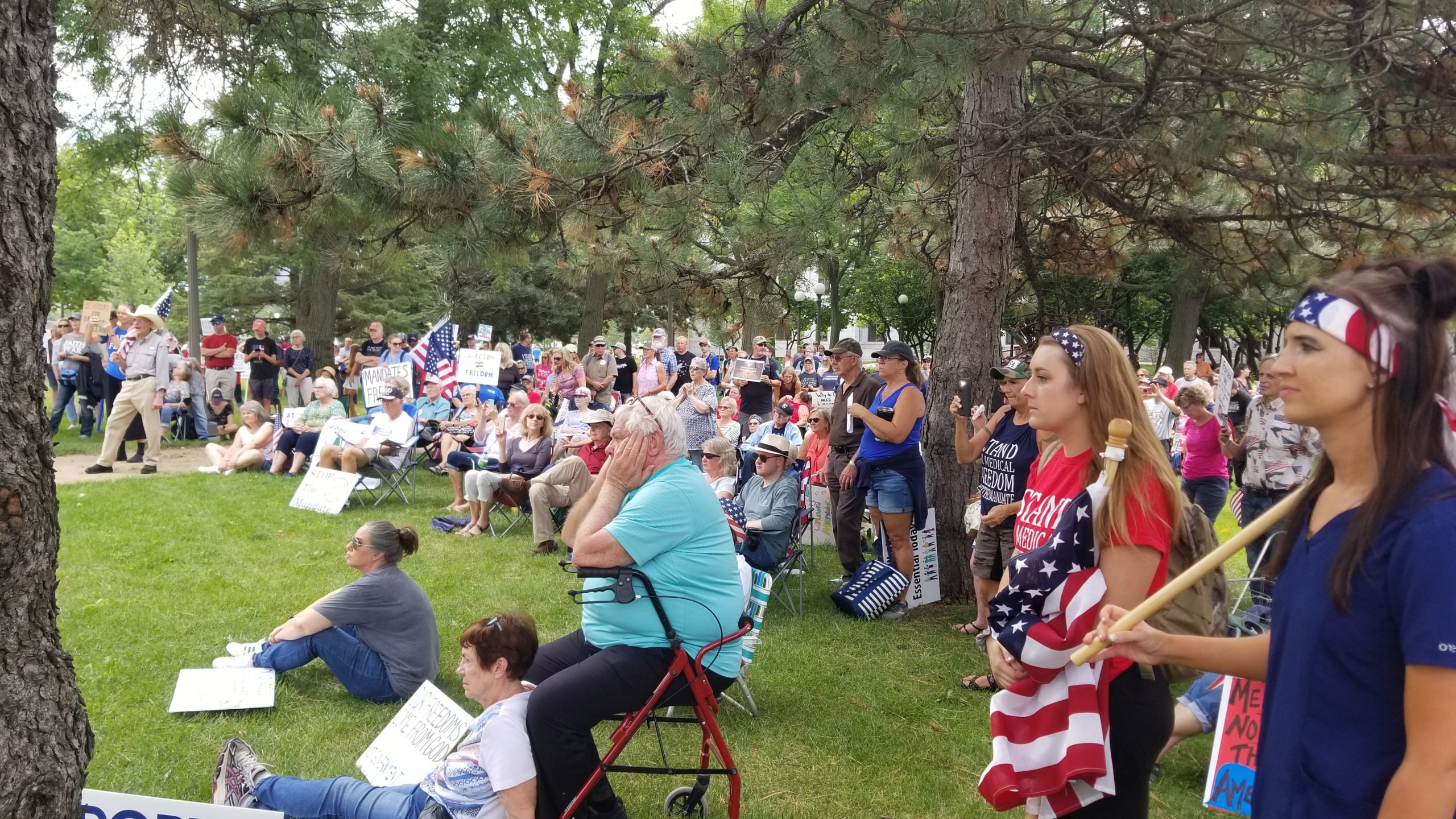 Roughly 500 God-fearing American patriots “showed up” to the Minnesota state capitol on a beautiful August morning to support the many Minnesotans in the medical and governmental fields who are being faced with the unconscionable illegal, immoral, unethical and unconstitutional mandates by government and corporate bullies demanding these men and women receive the extremely controversial vaccines related to the pandemic.

Whatever happened to “My Body, My Choice”?

The event titled, “Show Up, Minnesota!” was the brainchild of Dale Witherington, Chief Steward of Restore Minnesota. Witherington noted the purpose of the event was not to be pro or anti vax. Instead, the purpose was to support those facing the outrageous, unreasonable and unjust ultimatums to get “vaccinated” with an experimental combination of unknown-to-the-public chemicals and who-knows-what other ingredients, and to bring to light the broader issue of a tyrannical government partnering with corporate intimidators who believe they can mandate an individual’s personal healthcare choices at the risk of losing their source of income, which for many would be devastating to their families in light of the ridiculously prolonged lockdown during 2020-2021.

The presenters at “Show Up, Minnesota!” were an impressive combination of current and previous State Representatives, State Senators and pastors. Pastor Tim Christopher from Berean Missionary Baptist Church provided a very spirited and inspiring challenge to people of multiple ethnicities to lock arms, especially in the parts of the Twin Cities that have become not only extremely dangerous, but deadly, due to the dereliction of duty and lack of leadership by Minnesota’s governor, Minneapolis’s mayor and the Minneapolis City council. His message to the crowd in general and to those who attend local churches in particular was, in essence, “Talk is cheap. Now is not a time for more talk. Now is a time for action!”

“Talk is cheap. Now is not a time for more talk. Now is a time for action!“

State Representative Eric Lucero and former State Senator Scott Jensen pointed out the clear Socialist/Communist agenda of the tyrannical executive branch of Minnesota’s government with Lucero providing a strong visual to educate people that Socialism/Communism might look like a beautifully wrapped gift to some. However, the reality is, when the package is unwrapped the gifts inside are hideous and ultimately destructive to all people at the cost of their God-given freedoms.

The message from all was clear. If an oppressive government and corporate tyrants can get away with this, what could be next?

A hint as to what could be next was a paragraph read by former State Representative Jim Newberger. The paragraph came from an email sent by the Governor of Minnesota to and through his leadership staff. It was only sent to the legislators and staff who are members of his Socialistic party. The paragraph clearly inferred to all who read and heard it that Minnesota’s Governor is threatening another lockdown of the state very soon. Several of the presenters agreed we must not allow that to happen. People are encouraged to call their State Representatives, State Senators and the Governor’s office telling them “No vaccine mandates. No vaccine passports. No lockdowns. Period!”

“No vaccine mandates. No vaccine passports. No lockdowns. Period!”

“Show Up, Minnesota!” ended on a high note with Witherington acknowledging the answers are ultimately not found in government but in God. With references to Ephesians 6:16 and Jeremiah 2:11-13, Witherington reminded the crowd the battle will be fought in the spiritual realms even more so than through mere political activism. While agreeing both prayer and activism are necessary, with activism being the logical by-product of praying, he used the closing as a call to people to return to the God of our nation, the God of the universe, our Lord and Savior Jesus Christ.

The event closed with an invitation for people to host a “Show Up, Minnesota!” in their county/community, as well as to think about forming a Restore Minnesota Community Action Team where they live. If that appeals to you, go to www.RestoreMN.org and contact Dale Witherington.